When a black Friesian prances by in a parade, you can’t help but admire how “majestic” he is. But what is a Friesian? 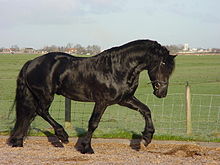 “His glory is great in Your salvation; honor and majesty You have placed upon him.”

Have you’ve noticed how many horses are named after places where they were first found? Friesians, sometimes called “Belgian Blacks,” fit into this category. Considered one of the oldest breeds in Europe, the Friesian originated in Friesland, a province in northwest Netherlands. Although he has the strong build of a draft horse and looks like he’d only be used for pulling a plow, he’s graceful and nimble. When he prances by in a parade, people can’t help but admire how majestic he is.

As majestic as the Friesian appears to be now, it’s believed that during the Middle Ages (the 5th to the 15th Centuries), his ancestors were used as war horses. The Friesians’ husky size and strength enabled them to carry knights in heavy armor. During the 16th and 17th Centuries heavy war horses were no longer needed, so Andalusians were crossbred with Friesians to produce a lighter horse for driving carriages.

Over the next 300 years, interest in the breed dropped, and Friesians nearly became extinct. Sadly, at the turn of the 20th Century, there were only three purebred stallions left. The breed struggled to survive, and then, contrary to so many other horses that declined during World War II, the Friesians made a strong comeback. Dutch farmers used them for transportation and farming due to fuel shortages.

Despite the Friesian’s shaky roots, he’s growing in numbers and popularity and performs in all kinds of harness and under saddle competition. Most recently, he’s also making a strong showing in dressage events.

The most unusual fact about the Friesians is they must be black to be registered. However, their colors can also be black/bay, dark brown, and chestnut is sometimes allowed for mares and geldings. If there’s any white at all on a Friesian, it can only be a small star on his forehead.

The Friesian stands at 14.2 to 17 hands. He has a beautiful arched neck and a muscular body with strong, sloping hindquarters. He has a long, thick mane and tail, which are often wavy, and his feet are feathered. He’s known for a brisk, high-stepping trot. Although he’s very energetic, he’s also gentle and trains well.

Friesians come with two different body types—baroque (bah·roke), which has the more solid build of the first Friesians, and the finer-boned sport horse. Although both types are common, the sport horse has become more popular in the show ring.

Because of their gorgeous black coat, flowing mane and tail, arched neck, and high step, Friesians appear in many movies and TV shows, especially in fantasies. They remain calm and perform beautifully when being filmed, and they are stunning in their appearance. A Friesian tends to have great presence and to carry himself with royal elegance. Whether he’s driving a fancy carriage or prancing under saddle, he can only be defined as majestic.

Anyone or anything that is “majestic” has a quality of dignity, beauty, and grandeur. The word “majesty” refers to someone who has great power or a high position. Have you ever heard someone call a king or queen “your majesty”?

The Bible tells us that Jesus is the Supreme Authority of the entire universe and heavens, and we should worship Him as the most powerful ruler of all. Someday King Jesus is coming back to earth on a white horse, and every Christian will have the privilege of bowing in person before Him and addressing Him as “Your Majesty.” I can’t wait for that time to come.

How about you? Is the Majestic God of the Universe the King of your life?

PRAYER: Dear God, I want You to be the ruler of my life. I pray I’ll be a loyal servant, willing to do whatever You ask of me.  In Jesus’ name, amen.

Read Revelation 19:11-16 and find four titles of royalty Jesus Christ is called in those verses:

Take your ride: (Do you know?)   Some Friesian events feature the horse driving a sjee, a cart with only two, but very large, wheels.

Dismount and cool down your horse! (Do you know?) “To the only wise God our Saviour, be glory and majesty, dominion and power, both now and ever. Amen” (Jude 1:25).

DO YOU WANT TO LEARN MORE ABOUT DIFFERENT HORSE BREEDS?

What a REAL Keystone Stables Books fan looks like

Visit Marsha's website: http://www.marshahubler.com! Learn all about Marsha's books, and learn how to win a "horsie" gift. Read interesting stories about other kids and horses. Go to the CONTACT link and email Marsha. She loves to hear from her fans.