Gypsy Vanner Horses have gained popularity with horse lovers worldwide only recently. But what is a Gypsy Vanner?

The Gypsy Vanner: The Horse with Many Names 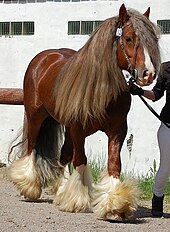 “Wherefore God also hath highly exalted him, and given him a name which is above every name: That at the name of Jesus every knee should bow, of things in heaven, and things in earth, and things under the earth.”

Gypsy Vanner Horses have gained popularity with horse lovers worldwide only recently. However, the Romani people (nomads) of Great Britain have known of this breed since the mid- 19th Century.  In fact, those travelers were instrumental in developing this special horse over the next fifty years. Through the crossbreeding of Dales Ponies (known as strong draft pullers), Fell Ponies, Shires, and Clydesdales, the short but stocky and powerful Gypsy horse emerged. The wandering groups finally had the perfect horse to pull their vardoes, also known as caravans (little houses on wheels).

A Gypsy Horse received special training to pull a vardo. Going up a steep hill, he had to learn to keep pulling the vardo until he reached the pinnacle; otherwise, because of the weight of the vardo, the horse might not have been able to get started again. During training, an old hat was sometimes placed on a frightened horse’s head. That kept him from seeing backward over the top of his blinders at the wagon looming at his back and spooking him. Because the horse was so essential to the travelers, he was considered part of the family and interacted with even the children. Thus, only those Gypsies with calm temperaments became vardo horses.

The Gypsy has the body type of much larger draft horses with heavy bones and broad backs, but most of the breed only stands at 14 to 15 hands. He comes in all brown and black colors and all combinations of pinto. A major feature making the Gypsy so handsome is the long-flowing mane, tail, and impressive feathers on every leg from the hock down. Besides his amazing appearance, the Gypsy is friendly and willing to learn.

Gypsies are now being used in all kinds of events. They pull carts and carriages, perform in dressage and show jumping, and they’ve become popular western pleasure horses. Because of his sweet nature, he’s also a wonderful family horse and is a great trail horse or therapy equine. In the U. S., the Gypsy horse is used in many equestrian sports and does quite well in combined driving and dressage. In 2001, a pair of Gypsies became grand champs in tandem driving team competition (one horse directly in back of the first horse, not side by side).

More interesting than the Gypsy Vanner’s roots is the long list of names this horse has been given: Colored Cob, Gypsy Cob, Irish Cob, Tinker Horse, Tinker Pony, Gypsy Horse, and, of course, the Gypsy Vanner. How in the world did this little horse get so many different names?

Founded in 1998, 2002, and 2003, three different groups of horse lovers, the Irish Cob Society, the Gypsy Cob and Drum Horse Association, and the Gypsy Cob Society of America all decided to refer to the breed as “Cob,” the name they believed the Romani breeders used.

Gypsies are also called “Tinker Horses” or “Tinker Ponies.” Those names originated with breed associations in the countries of Belgium, Sweden, and the Netherlands, where the Gypsies are listed in the Universal Equine Life Number database under the Tinker breed name.

In 2008, the newly incorporated Gypsy Horse Registry of America used the name “Gypsy Horse.” However, this organization states that it recognizes all breed names in use today.

So how did the breed assume the most popular name, Gypsy Vanner?

As early as 1888, the term “vanner,” had referred to a type of horse rather than to a certain breed. Since Gypsies originated as horses used for pulling vardoes or caraVANs, the name “Vanner” became associated with the breed.

In 1996, Gypsies made their way to the United States thanks to horse enthusiasts, Dennis and Cindy Thompson, who weren’t sure the breed had a proper name. They had read about the name “Vanner” being added to the horse’s name in other countries, liked the name, and founded the Gypsy Vanner Horse Society that same year.

While the Gypsy Vanner has seven different names, do you know the Lord Jesus Christ has many more?  The Bible tells us that Jesus has over a hundred different names, and every name exalts Him as the only true God and Savior.

Have you ever heard Jesus called “The Great Creator” or “The Good Shepherd”? How about “The Prince of Peace” or “The Son of God”? These are just a few of Jesus’ many names, all displaying His wisdom, power, and love for us.

Do you have a favorite name for Jesus? No matter which name you choose as your favorite, always remember one of the most important names, “Savior,” the one that offers eternal life to those who truly believe.

PRAYER: Dear God, I realize that the names Jesus has all point to how great and wonderful He is. Thank you most of all, Jesus, for being my Savior.  In Jesus’ name, amen.

Read these verses in the Bible and find the names given to Jesus:

Take your ride: (Do you know?)  Training a Gypsy to pull a vardo began at a very early age with the colt or filly tied with a short rope to the collar of the pulling horse then led along that horse’s side.

Dismount and cool down your horse! (Do you know?) “For unto us a child is born, unto us a son is given: and the government shall be upon his shoulder: and his name shall be called Wonderful, Counsellor, The mighty God, The everlasting Father, The Prince of Peace”  (Isaiah 9:6).

DO YOU WANT TO LEARN MORE ABOUT DIFFERENT HORSE BREEDS?

What a REAL Keystone Stables Books fan looks like

Visit Marsha's website: http://www.marshahubler.com! Learn all about Marsha's books, and learn how to win a "horsie" gift. Read interesting stories about other kids and horses. Go to the CONTACT link and email Marsha. She loves to hear from her fans.